When you drive towards the town of Jerome, nestled against the slopes of Cleopatra Hill you immediately feel like travelling back in time. Originally the town was founded on top of a vast deposit of copper. But one is mistaken when you think the white settlers were the first to mine the area. As a matter of fact ancient American Natives mined the surrounding hills searching for colored stones such as the sacred turquoise. The Spanish on their constant hunt for more gold were the next to dig around the area but all they found was copper, not gold. The first Anglos started mining claims from 1876 onwards.

The little Daisy mine was one of the most successful ones and driving into town you can still get a clear idea about the equipment and the unbelievable depth of the mining shafts when visiting Audrey Shaft right next to the main road.

Men had to be brave to even enter those shafts.

At the Audrey shaft one gets a clear picture of how deep that shaft was driven into the ground.

The Eifel Tower in Paris would have easily fit into this deep shaft.

Machinery equipment can be looked at for no admission fee there.

Jerome started off as a camp of tents but soon grew into a real town and its development was similar to the one of Tombstone, Arizona around the same time. Jerome grew rapidly from a rural primitive tent city to prosperous company town as it followed the swing of the mine’s fortunes. The mines, the workers, and those who sought its wealth, formed Jerome’s colorful history. Americans, Mexicans, Croatians, Irish, Spaniards, Italians, Germans, and Chinese made the mining camp an international mix of cultures that added to the excitement of Jerome.

One of the art galleries is located in an historic saloon where you can admire the beautiful tin ceiling, antique bottles and listen to the story of the killing of the owner that took place her once in the old days.

Not only businesses but also saloons and of course, brothels with their soiled doves soon added an interesting opportunity for miners to spend the hard earned money. Nowadays those houses of ill fame often host gift shops or art galleries.

Jerome was the talk of the Territory during its heydays and the absolute favorite of investors. The mines brought billions of dollars in copper, gold, and silver from their depths underground. Changing times in the Territory saw pack burros, mule freight wagons, and horses replaced by steam engines, autos, and trucks.

But as for so many boomtowns destiny showed no mercy for Jerome as well. Fires ravaged the town leaving it badly damaged and landslides destroyed whole sections of the town. Landslides even caused the town prison sliding down the hill as if it was a toy house. Today it stands more than 200 feet downhill from where it had been originally built.

However, Jerome was always rebuilt. But the dropping of copper prices, labor unrest, depressions and wars, caused Jerome’s mines finally to close in 1953. The population dropped drastically from 15´000 to only 50 people and the town would have died if not for a handful of locals trying so hard to keep the building intact and to avoid vandalism. The Hippies moved in and with them a community of artists changing the town into a hot spot for South Western arts and galleries.

Jerome was turned into a historic landmark in 1967. They locals changed the dying ghost town into a lovely community with interesting art galleries and cool biker bars. Restaurants offer tasty international cuisine. Now Jerome is home to writers, musicians, artists and historians. Buildings have been restored to its former grant and Jerome´s position on an elevation of 5066 feet make it an ideal spot to escape the summer heat in Arizona. The drive to Jerome takes about 3 hours from Phoenix. 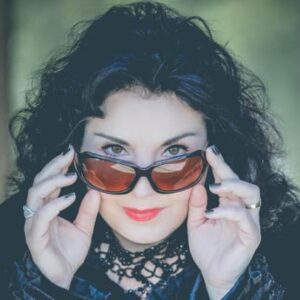 Drawing energy from strong pioneer women of our past, Western Fiction author, Manuela Schneider, is driven to create captivating sagas of strong female characters who are immersed in a battle against hardship, mystery, and deception while searching for true love and a better life. To date, Schneider has written and published nine Western Fiction novels that ultimately leave readers wondering, “Will the story continue?”
All Posts »
PrevPreviousLoretto Chapel
NextOld Tucson Movie Studios in TucsonNext